Based at a 44,000 sq foot site in Bury, Lancashire, we are a very well established, family owned and run company with 35 staff in total. We have an excellent team of people with a great blend of experience, technical knowledge, drive and enthusiasm. We believe that investing in our people is absolutely key to running a successful business and we are lucky to have so many long serving, dedicated staff.

Our aim is to ensure that our service levels more than meet our customers’ expectations and we do that by producing quality products, on-time and with a smile on our faces! Customer relationships are everything to us, people deal with people and we always strive to create a lasting impression and relationship with our customers.

For further information about our history, please see below. 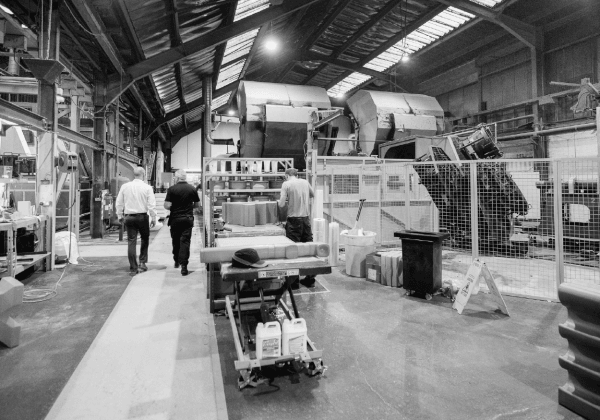 Quite A Story To Tell

Excelsior was established in 1896 and incorporated in 1902.

We are extremely proud of our history and like to shout about our achievements. In an age where plastic manufacturing is deemed to be in terminal decline, we feel that it is important to wave the flag for British Manufacturing and prove the doubters wrong! Here is our timeline along with some interesting facts about us. 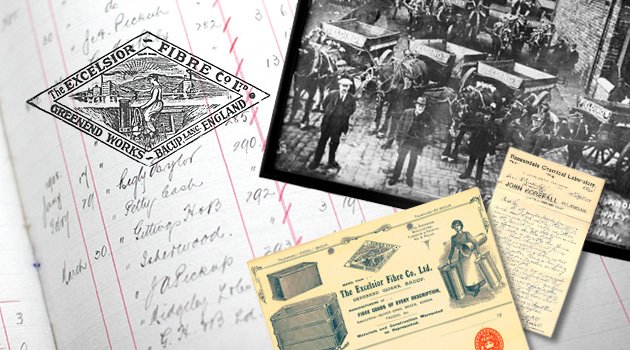 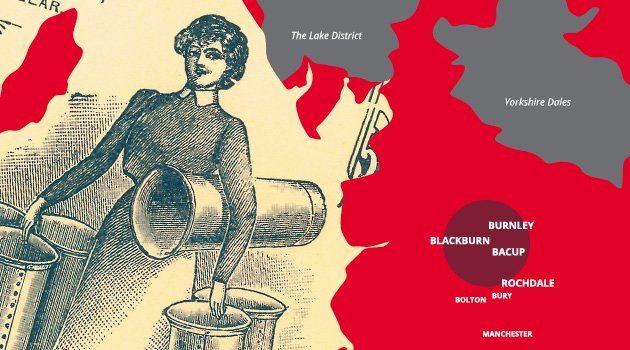 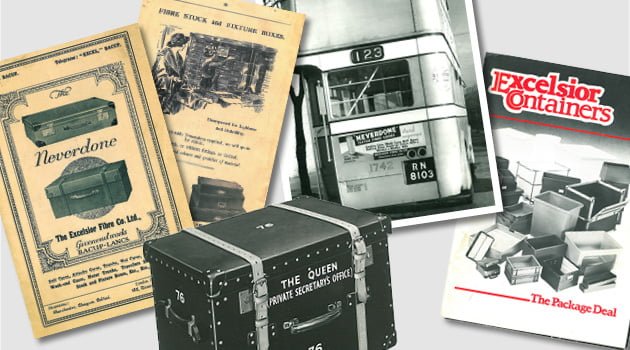 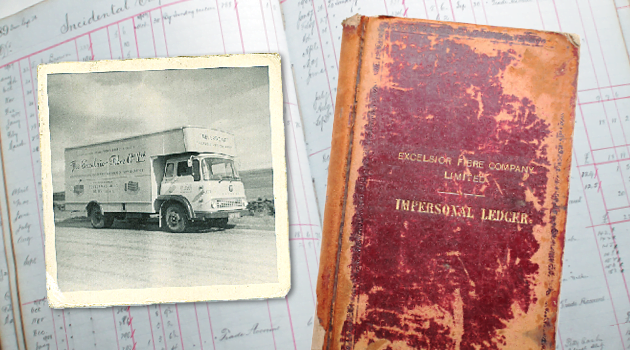 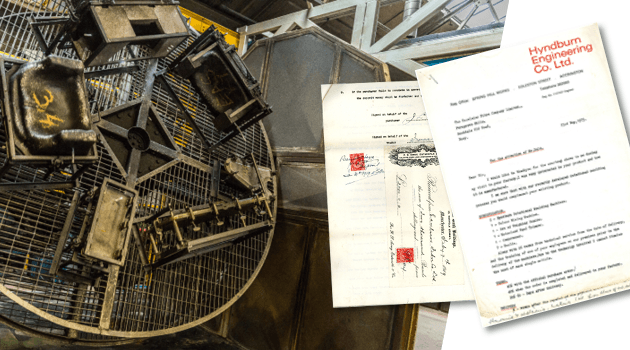 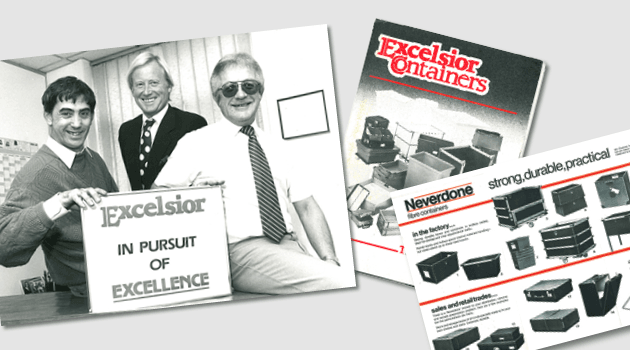 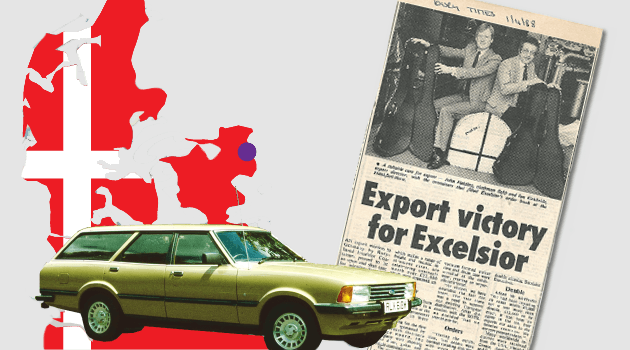 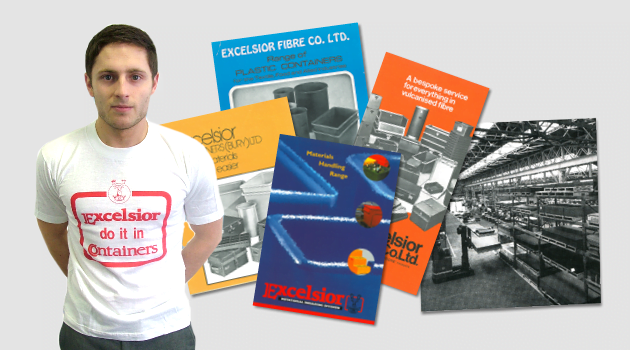 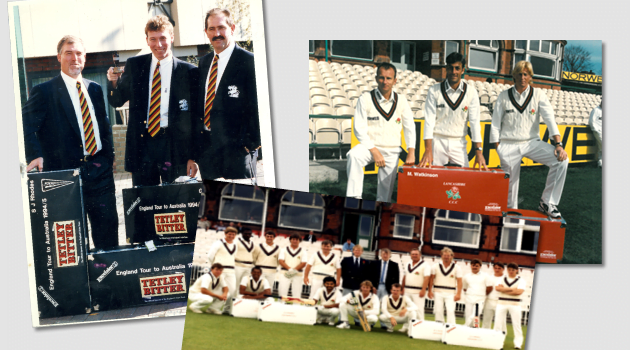 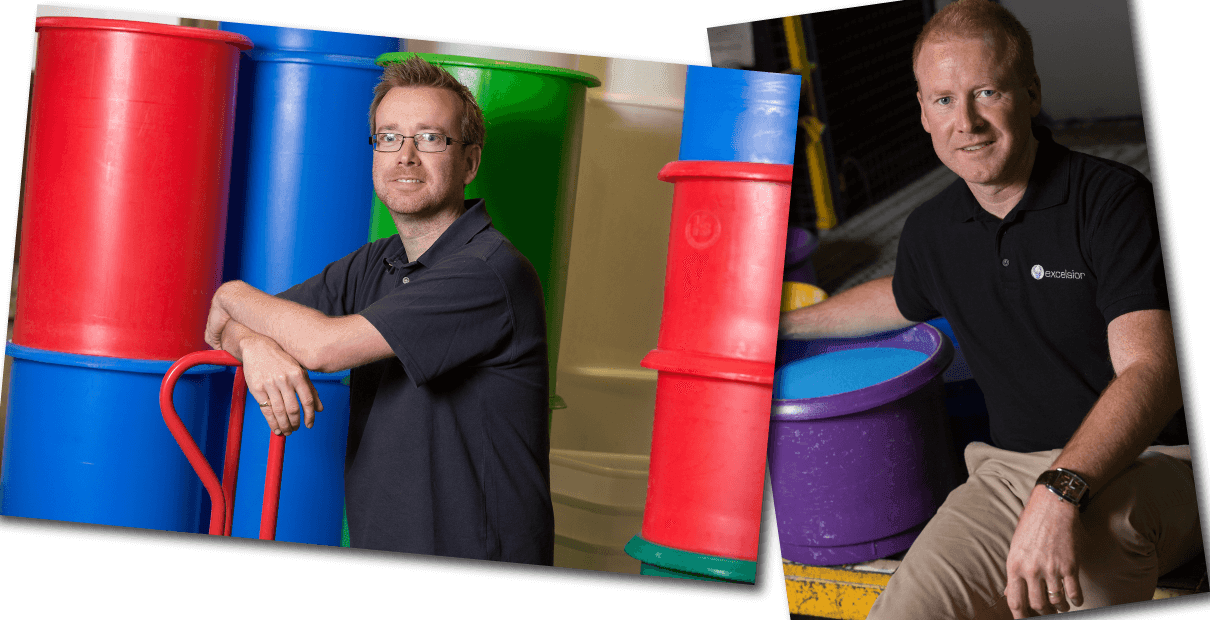 Established way back in 1896 we are proof that British manufacturing is alive and well. Extremely proud of our history, we have quite a story to tell...

The Excelsior Fibre Company was founded in 1896 by two Swedish businessmen. Coincidentally, in the same year John Fielding and his son Abraham were founding a Coal Merchants business in Newhey, Nr Rochdale.

In October 1902 The Excelsior Fibre Company Ltd was one of the first businesses to be incorporated under the new Companies Act. Three years later John Fielding and Son was also incorporated.

The above photo shows John Fielding in the foreground sporting a beard and hat, with his son Abraham in the cap next to him. This photo was taken in around 1905 when all deliveries were made by horse and cart.

A mill girl carrying THE major fibre product used in spinning mills – spinning cans or sliver cans as they were known in the trade.

For example, they made trucks (or wagons as they were called) with fibre sides reinforced with wooden frames - all on a wooden base with a variety of wheel sizes and configurations. These were pushed around the mills by girls to pick up materials but also, and more importantly, to wheel away finished product.

An example of the cases made for Her Majesty The Queen’s Commonwealth trip of the early 1960s. A leaflet showing the range of fibre products produced including trunks, trucks (or wagons), fibre boxes for conveyor systems and sample cases.

Double Decker bus in the 1950s carrying a trade advert for Neverdone on the rear.

In those days fibre products often carried the trademark “Neverdone”. The word “Neverdone” in the north of the country meant an object would never become worn out. Northerners understood it well enough but when Excelsior tried to sell to a wider customer base in the 1980s, it was greeted with confusion and soon dropped.

Over the course of the first half of the 20th Century both Excelsior and John Fielding and Son had built successful businesses.

Excelsior had continued to sell its fibre products to the mills and its sample cases and other products to a range of customers, facing very little competition from other manufacturers. It had built a strong reputation in the spinning and weaving industry and its customers kept coming back.
Up until the early 1960s, Excelsior also had a factory in Tottenham Court Road, London. Just a small unit with a dozen or so workers, it was compulsorily purchased by the local authority to make way for redevelopment.

The lorry shown had bright yellow livery and was used in the 1960s for delivering products across the UK.

John Fielding and Son had also prospered. Old John had died in 1913 and his son Abraham had been expanding the business, swallowing up smaller outfits along the way. Abraham died shortly after the outbreak of the Second World War and his son Kenneth, then just 21, had been called into service so the business was temporarily managed by a relative. Kenneth was demobbed in 1946 and immediately took over the business.

Ken looked for and found a new business to invest in. Excelsior was for sale and he bought it.

The photo shows Excelsior’s summer works outing to Blackpool Pleasure Beach in 1953. Kenneth Fielding is on the left of the picture with the recently retired former Managing Director Joe Chadwick in the foreground.

Excelsior continued to do well enough for the next 20 years but then a new product began to compete with the old vulcanised fibre spinning cans and trucks. This new material, plastic, was moulded using a process called rotational moulding and was suitable for small runs.

In 1976 and in direct response to the challenge posed by plastic, Excelsior bought the assets of a small East Lancashire company. It comprised one moulding machine and six tools and could make a range of six different sized trucks. Know-how and training included, £8000 the lot. It might not seem very much now but back then it was a bit of a gamble!

The acquisition of the new technology proved extremely successful and soon Excelsior was competing for and winning orders for plastic products and broadening its range all the time.

In 1978 Kenneth Fielding died aged just 59. His elder son John Fielding was a lawyer by trade and had built a successful career in an American-owned multinational food company but when asked to move to America he declined and in 1982 joined Excelsior. Together with Sales Director Ian Kirkbride, he set about building Excelsior a bright future.

John can be seen in the middle of the photo flanked by Ian Kirkbride wearing dark glasses and employee Roy McKernan to his left.

The potential for plastic moulding was self-evident and Fielding and Kirkbride set about building a sales force and extending the manufacturing facility. Excelsior grew quickly from a £400,000 turnover business to £2 million. Various new product ventures followed and its customers grew ever more prestigious. For instance, a range of avionics cases for British Airways was extremely well received.

In 1986 Kirkbride and Fielding set out for Denmark in a Cortina Estate. They took sample cases and through the local equivalent of the Yellow Pages, found in Copenhagen a number of percussion instrument retailers. After two days they had decided on a distributor and returned home with a £3000 order. Suitably encouraged, the following year they exhibited at The Frankfurt Music Show and generated yet more business.

The newspaper cutting shows Fielding and Kirkbride in June 1988 after returning from Frankfurt.

Industrial mail order catalogues had become a growing market for Excelsior and the need to produce a comprehensive range of materials handling containers became paramount. So, throughout the 1980s Excelsior started making trucks, tanks and bins in all shapes and sizes.

An Excelsior employee sports the T shirt worn by Excelsior staff at the International Materials Handling Exhibition at the NEC in 1989.

Acquisitions were made throughout the 1980s including Smith Rotational Moulding Ltd and Crossfield Patterns Ltd. By 1994 the business had become too big for one site so the fibre (or ‘fabricated’) business as it became known moved to Irwell Works. The burgeoning moulding side of the business remained at Ferngrove Mills.

During the early 1980s John Fielding became friendly with Lancashire cricketer Jack Simmons who also bought and re-sold fibre cricket cases – known in the cricket business as “coffins”. This led to Excelsior sponsoring the Lancashire team and supplying it with cases. Excelsior cases were seen throughout the counties and were ultimately used by MCC touring sides.

In the photo England players Mike Gatting, Mike Atherton and Graham Gooch pose with the Excelsior cases taken by the England team on the 1994/5 tour of Australia.

The team shot is, of course, Lancashire!

In 1997 Excelsior sold the Ferngrove site to developers having outgrown it. The company bought a new factory in Deal St, Bury which was sufficiently near to Ferngrove that it could keep its workforce.

It also occupies a site at Woolfold, where both moulding and tool manufacturing operations continue.

John Fielding retired in 2006 though remains Company Chairman. Operations are now run by his eldest son Giles in conjunction with a very knowledgeable team with vast experience across all areas of the business. In addition, several other members of the Fielding family continue to work at Excelsior. Giles’ brother Jonny is a Director and looks after sales of materials handling products, while Giles’ wife Karen is responsible for sales of all equestrian products. Having family members involved brings obvious benefits and gives Excelsior an excellent mix of young and experienced employees driving the business forward.

We’ve built our business and reputation around some key principles: