At this time of year, the chilly weather can end up creating some pretty dangerous wet or icy conditions which can all too easily lead to slips, trips and falls. This is why grit bins are such a vital utility for homeowners, businesses and local authorities in the winter, providing a handy means to melt enough snow and ice for people to travel safely across it.

However, it’s illegal to use public grit bins unless you’re specifically planning to grit public property. If you’re only planning on focusing your own private land, whether that’s a private driveway or a commercial car park, that’s where you’ll need a grit bin of your very own. Thankfully that’s where we can help here at Excelsior – as expert plastic manufacturers, we provide a great range of grit bins to choose from. What’s more, we’ve got a couple of useful bits of info for you to ensure that you can get the best out of yours.

Protect your grit from the elements

In a nutshell, the substance we call grit in this context is actually a combination of salt and grit, and it causes what’s called a ‘freezing point depression’, which lowers the temperature at which water freezes and re-freezes. That means not only is able to melt the ice, but also prevent it from forming again for an extended period of time – which is a big part of what makes it so useful.

However, all this means that grit only works once. That’s the main reason why grit bins are made out of impermeable plastic – if it gets wet, it’s essentially useless. If you’ve ever got out of the shower and tried to dry yourself with an already wet towel, it’s broadly the same principle. Our rotomoulded grit bins are made out of medium density polyethylene, so they’re more than capable of standing up to everyday knocks and bumps, and they’re water resistant too. Just to be on the safe side though, lots of our customers choose to keep their grit bins under cover, to minimise the chances of contact with rain or hail.

Stashing your grit bin away also has the advantage of hiding it away from cheeky passers-by looking to help themselves for their own driveways and private property. It’s been known to happen!

One of the best ways to ensure that your grit bin is ready for rain or snow is to make sure that it’s actually got grit in it. It sounds silly, but it’s a mistake that can be surprisingly easy to make! After all, most people don’t look twice at their grit bins throughout most of the year, so a quick check (and a top up if necessary) around now never goes amiss.

If you do spot that frost or snow has been forecast, it’s often a good idea to lay some grit before the first flakes have actually hit the ground. This can prevent the worst of potentially dangerous ice from ever forming in the first place – so while it might involve an early morning to get on-site before it falls, it’s often more than worth it in terms of the safety value it provides.

Top tips for laying your grit 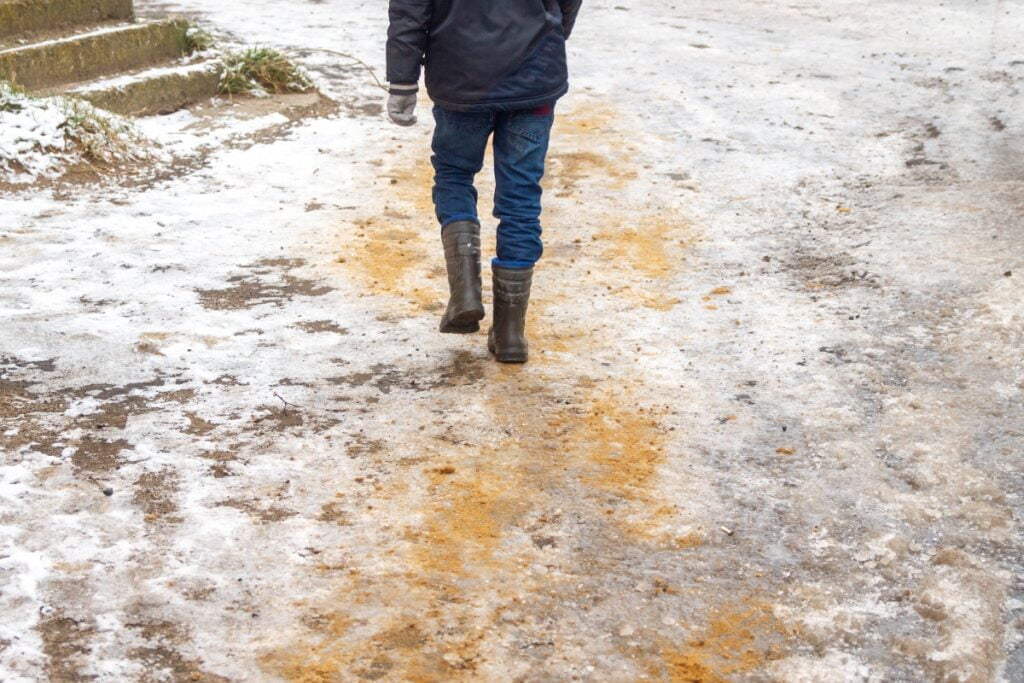 If the snow has already fallen on the other hand, don’t forget that the thicker the snow, the more salt or grit you’ll need. Keep a shovel handy – you can use it to move some of the thickest snow to the side, or break up the ice before gritting the surface. The more frozen water you’re able to deal with yourself, the more effectively your grit will be able to work on what’s left.

Plus the more grit you use, the quicker it will act, but make sure you’ve got enough to deal with the whole surface area of your premises, including any driveways and walkways. You’ll probably find that it’s easier to grit larger driving spaces because every vehicle that travels over it will be effectively ‘treading’ it in, but since human beings are much lighter, foot traffic areas can be slower to thaw. It’s therefore worth taking extra time and care when gritting these – you might also want to consider whether it’s worth putting up signs explicitly warning people to take care.

And if you’re on the hunt for a brand new grit bin, you’re in exactly the right place. We’ve been manufacturing grit bins for over 20 years now, and our range spans from small domestic grit bins all the way up to large 500kg capacity roadside bins. You can find out more about our plastic manufacturing capabilities with grit bins here, or if you’re already prepared to place an order, feel free to give us a call on 0161 765 2010, and find out what we can do for you!